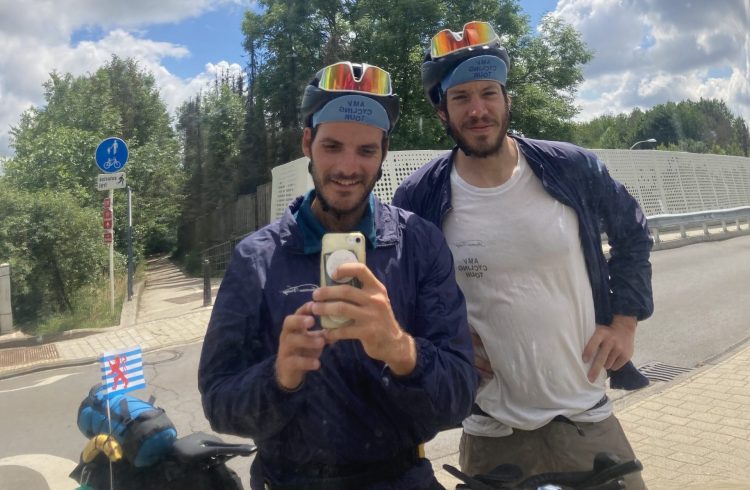 When they’re not working at American Vintage, Antonio and Arnaud, respectively a recruitment manager and graphic designer, can be found on their bikes. Their latest feat? A 1,300-kilometre tour of Europe in just 11 days. A great opportunity for them to meet the AMV teams.

It all started with a first trip. Last year, Antonio and Arnaud (who work at the American Vintage headquarters) left for Milan on a whim. They departed from Signes in the Var region in France, not on a plane or a train – but on bikes! When they arrived, they immortalized their adventure in front of the American Vintage store in the Italian capital. The experience was so great that they decided to do it again. So, a few months ago, they set off from Paris, equipped with AMV clothing made especially for them.

Also see: Life at the American Vintage HQ in Signes 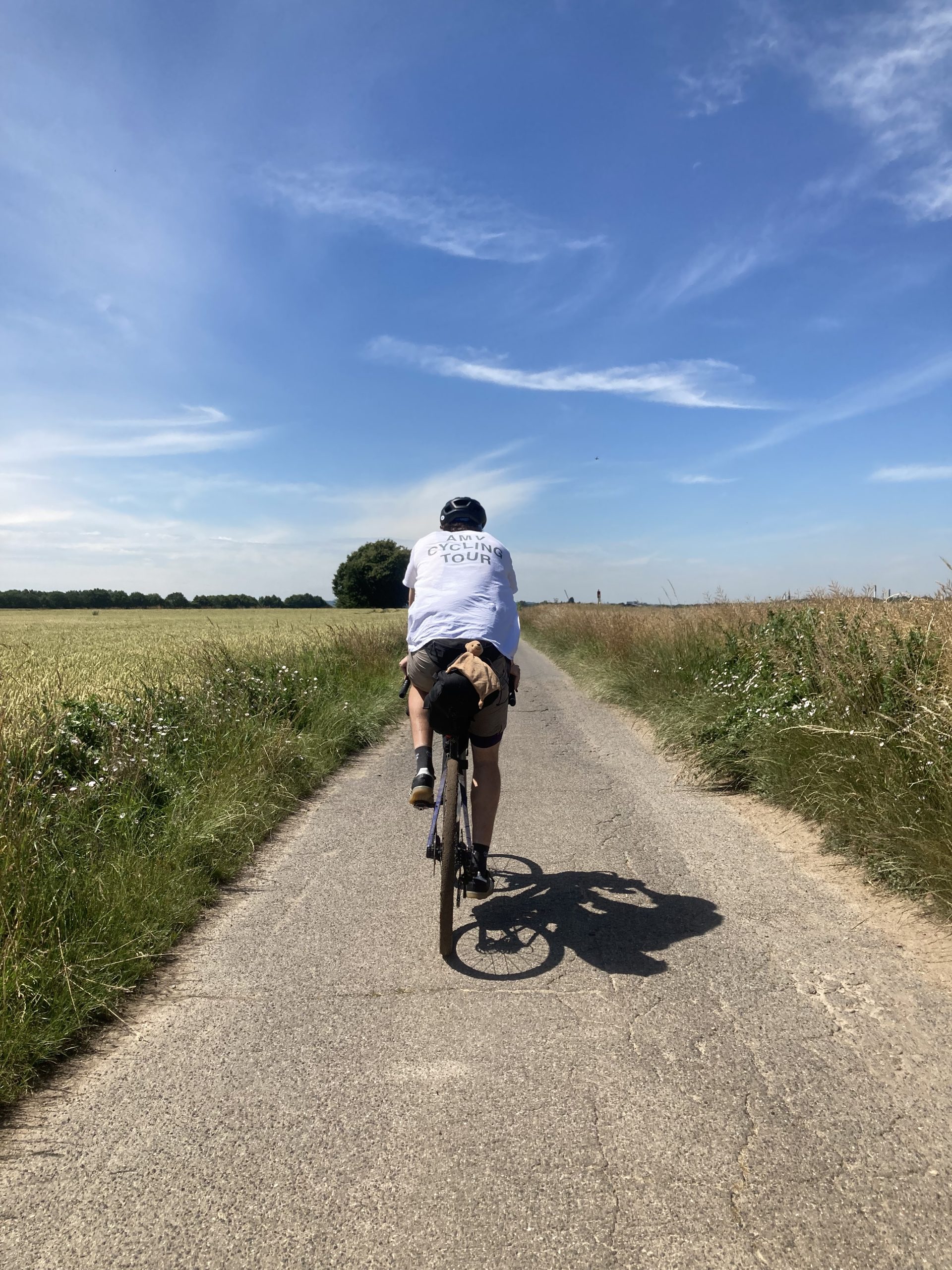 “We wanted to show that it’s possible to travel by bike, even when you’re not a pro. We went through it all in terms of weather: rain, heat waves, cold. At times, it was difficult, both physically and mentally. But cycling allows you to completely disconnect from everything, to surpass yourself, to experience a form of freedom that you can find nowhere else.”

“A nice hundred kilometres or so to get warmed up. We’re motivated! First, we met Caro and Véro at the American Vintage showroom. After a team photo, we headed off for adventure. We went down historic roads and even saw a deer. For a heat wave period, the weather wasn’t too unbearable. In the evening, we set up our tent in a field in Cambrai: first night in the great outdoors.”

“After taking down the tent and freshening up, we headed to Belgium. Luca, the store manager, was there to greet us. He recommended the lightweight and flowing FILWOOD shirt, perfect for bicycle touring. He told us about his travels and we talked about our project. For him, this cycling tour is a great way to push past our limits and get to know ourselves. He recommended some must-visit spots in the Belgian capital: the Mannekin Pis fountain and the Grand-Place, said to be the most beautiful square in the world. As for food, we had to try waffles, chocolate, beer and fries. The secret behind the fries? They’re cooked twice.”

“The road is well-designed for bikes. It’s really nice. We make the most of this to do a paceline and save energy. In Antwerp, we talked with Branko, a Spanish music fan who has worked for American Vintage for three years now. He recommended fries and antwerpse handjes (sort of hand-shaped cookies), two local specialities. Then, it was (already) time to leave for our final destination of the day. The night didn’t go as smoothly as planned. We were tossed about by the storm and strange noises around the tent kept us from sleeping. But that’s what an adventure is all about, right?”

“After an awful night, we hit the road again. Next stop: Rotterdam. Catarina, the store manager, welcomed us with breakfast. This was a ray of sunshine for us, especially after an early morning spent in the rain and cold. Catarina’s been working for American Vintage for four years now. For her, the brand is like a big family. In Amsterdam, we talked with Routa and Laurine, the local AMV team. The city is great. The roads are flat and the bicycle lanes are well kept. We had a nice dinner in an Italian restaurant and enjoyed a (well-deserved) night in a hotel.”

“We started with a big breakfast and a souvenir photo with the team in front of the canal. Our two goals of the day: do some laundry and reach the German border. Mission accomplished! This portion of the trip was a piece of cake. We rode on the big flat roads, where we were able to speed up. We dried some of our laundry on our bikes. And we ended this segment with an amazing sunset. We set up the tent in a comfortable field, which was perfect despite the mosquitoes.”

“We woke up naturally, with the sun, around 6:30 a.m. We already felt tired. In Düsseldorf, we arrived during the sales period. The store was packed, with Laura and Andra at the helm. They advised us to visit the old town, just steps away from the shop. We bought a snack and then hopped on our bikes again. In Cologne, Isabel was waiting for us. She’s from Spain. She’s been the store manager there for less than a year. Her motto? Good vibes, good mood and maximum energy. She’s also a fan of cycling. For her, it’s a form of freedom.”

“This was one of the most complicated stages of our journey. The roads were tough. We met Petra, the store manager in Bonn, who we recruited for our next AMV Cycling Tour. She’s very sociable and loves meeting new people. When she’s not on her bike, she’s walking her dog in the city. Then, we headed to Luxembourg. The roads were a little more exciting, rising and dropping, and dipping through forests. At 9:30 p.m., we reached our final stop and set up our tent in a field in the middle of nowhere. Physically speaking, we had seen better days.”

“We climbed on our bikes after a calm and restful night. The landscapes were lush and green. We rode through a lot of forests. This was a stage of the journey that gave us a different vision of cycling, since the area is very hilly. But our fatigue was catching up to us. When we reached the Luxembourg capital, Laura welcomed us. She shares many values with American Vintage, including a strong focus on family. As for Loic, he’s a graphic designer. He loves Luxembourg for its nature and its big buildings.”

“The store teams recommended a nearby café, where we took the time to pump up our tyres with air. We spent the morning riding in the rain. We were soaked, but we tried not to let that get us down. In Messancy, sunny and smiling Clémence lifted our spirits. Her favourite colour at American Vintage? Carbon grey, which goes with everything! Then it was time to head back to France. We were eager to see our teammates in the South again. It was a long day and the weather didn’t do us any favours. We set up camp for the night in Harricourt.”

“Second to last step of our Cycling Tour. The roads seemed endless. It was long and sad. Hard to keep our spirits up…”

“We made the most of every moment before going home. We treated ourselves to gravel roads. Our bikes were filthy with mud, so we stopped at a washing station to really get them clean. During our last kilometres, we saw the Eiffel Tower. We were nearing the end of our trip. Once we arrived in Paris, we talked with Jade, the regional manager. We admired the rooftop view from the showroom, which offered a panorama of the Parisian rooftops. Then, we got on a train for Marseille. The trip ended the same way it started: pedalling all the way to the American Vintage headquarters in Signes. When we arrived, we were greeted with a standing ovation and a gargantuan breakfast. So, there you have it. We did it!”